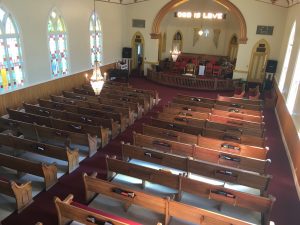 As a denomination proudly focused on educational excellence as a tool of social advancement, a portion of tithes and offerings from local AME churches goes to support higher education institutions run by the AME Church. They include Wilberforce University and Payne Theological Seminary (Ohio), Morris Brown College and Turner Theological Seminary (Georgia), Edward Waters College (Florida) Paul Quinn College (Texas), Shorter College (Arkansas), as well as several institutions on the continent of Africa.

The AME Church began expanding, primarily in the Northeast and Midwest, as a denomination focused on salvation, educational opportunity, and equal rights.  In 1816, the same year of its incorporation in Pennsylvania, the AME Church expanded into the South.  The first church established was Emanuel AME Church, in Charleston, SC.  Its founders included Morris Brown and Denmark Vesey.  Tragically, Emanuel again made national headlines in the summer of 2015, after the racially-motivated shootings, when the “Emanuel 9” were assassinated.

In 1844, as the AME Church expanded into the Deep South, the first church established was called “St. James Chapel,” in New Orleans. In addition to being the birthplace of the Prince Hall Mason’s Grand Lodge of Louisiana, the church’s most famous members include P.B.S. Pinchback, Louisiana’s only Black Governor, Oscar J. Dunn, a former Black Lieutenant Governor who also served as Grand Master of the Prince Hall Masons, and Jordan Bankston Noble, Andrew Jackson’s drummer during the Battle of New Orleans.  Since its establishment, the AME Church in New Orleans has been at the forefront of the civil and human rights movements.

In 2005, Historic St. James was uninsured when Hurricane Katrina almost destroyed it.  Shortly thereafter, the Rev. Otto W. Duncan, Jr., a son of the church, was appointed to lead restoration.  He ably did so, while also helping establish the Roman-Bienville Homes as a housing ministry of the church, until his retirement, almost 10-years after Katrina. In November 2015, Bishop Julius H. McAllister, Sr. appointed the Rev. Jonathan C. Augustine as Historic St. James’ 46th Pastor. Rev. Augustine and First Lady Michelle continue a tradition of excellence and community engagement, while also leading restoration work. Under their leadership, the church’s newest ministries include the Digital & Media Arts Ministry and the Julius Harrison McAllister Community Development Corporation, named in honor of the AME Church’s 129th elected and consecrated bishop.

Although affectionately called “historic” for years, the church’s legal name remained St. James African Methodist Episcopal Church, until 2017. Because of its unique place in African Methodism, as the oldest AME Church in the Deep South, and its designation on the National Registry of Historic Places as the oldest predominately Black, Protestant church in New Orleans, Pastor Augustine led the church in officially changing its legal name to Historic St. James African Methodist Episcopal Church, in October 2017, with both the Louisiana Secretary of State and Louisiana Annual Conference.

We are proud of our history and even more excited about our future. As we celebrate Black History, we also celebrate the African Methodist Episcopal Church.