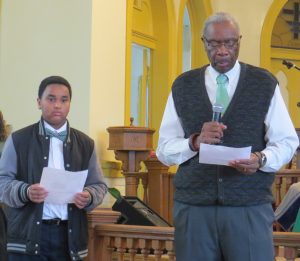 A group of ten members led by the Rev. Charles Doughty, a blacksmith, rented a site on the corner of Villere and Bienville Streets.  They held worship service, calling themselves the AME Church.  Almost immediately, police officers who objected to the congregation allowing slaves to attend worship services approached the congregation, fearing the new formation would incite slaves to seek freedom.  The leaders persevered and their faithful community increased.  Soon their quarters became too small and they began to seek land to build a church.

On October 6, 1848 the state issued a charter to the AMEC, authorizing it to legally operate in Louisiana with the ten founders as incorporators, including Jordan Bankston Noble, General Andrew Jackson’s drummer during the Battle of New Orleans.  According to the charter, slaves were not allowed to become members of the church or the corporation.  By December 1848, the church’s board purchased a site in the suburb of Treme and began constructing the church building.  It was completed in 1851. The entire congregation carried materials to the new church site, with women carrying bricks in their aprons.  They named the church St. James Chapel, with Rev. Doughty, the organizer and first leader of the congregation, traveling to the Indiana Annual Conference with a petition to affiliate with the AMEC. The conference, under the leadership of Bishop William Paul Quinn, accepted the petition and St. James Chapel became an official member of the connectional AMEC.  Rev. Doughty, formerly a local preacher in the Methodist Episcopal Church, was ordained a Deacon and continued as St. James Chapel’s pastor.

The second pastor was the Rev. John Miflin Brown, a well-educated Northern minister.  He encountered much hostility because he allowed slaves to attend the services. Under Rev. Brown’s leadership, the church grew both in membership and financial stability. The church also actively helped to organize and build other AME churches in New Orleans, including Morris Brown AMEC.  Rev. Brown was jailed five times during his five-year ministry in New Orleans and was later elected the eleventh Bishop of the AME Church.

From 1858 to 1862, police officers closed St. James Chapel because its membership advocated abolishing slavery.  During the Civil War, Colonel James Lewis organized a company of Black Union Soldiers that used the church as their headquarters.

The Louisiana Annual Conference of the AMEC was organized at St. James Chapel AME Church on November 1, 1865 with Bishop Jabez P. Campbell, presiding.  During the Reconstruction Era, some of the church’s members rose to great prominence in Louisiana politics, including Governor P.B.S. Pinchback and Lieutenant Governor Oscar J. Dunn.

Other historical events include the church being the founding site of the Black masonic organizations of Louisiana and the YMCA for Black men.  The church also provided the young people and advocacy to establish of a Black elementary school, initially known as the Bienville School and later renamed the Albert Wicker School, in honor of an educator who was a St. James trustee.

During the Civil Rights Era, Historic St. James maintained an active presence in addressing social justice and racial equality.  Moreover, in addition to the church’s pastors elected to the bishopric, several Historic St. James pastors have become presiding elders, as well as religious and thought leaders, in African Methodism and ecumenically.