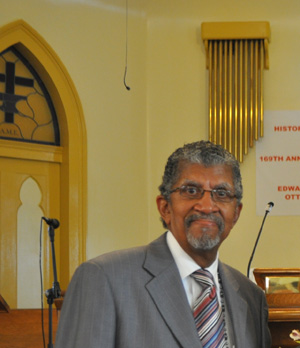 The Rev. Otto W. Duncan, Jr.
Reverend Otto W. Duncan, Jr., associate minister of Historic St. James AME Church, is a native of New Orleans and son of Historic St. James. He earned a Bachelor of Arts Degree in Biology/Pre-Med at Dillard University, before changing his career path from medicine to ministry and earning the Master of Divinity degree at Turner Theological Seminary at the Interdenominational Theological Center in Atlanta, Georgia, becoming, in 1965, the first ministerial student from the Eighth Episcopal District (Louisiana, Mississippi) to do so.
In 1965, Rev. Duncan accepted the late Bishop O. L. Sherman’s invitation to join the staff of Paul Quinn College where he served as an administrative officer for several years. He also successfully served as pastor of AME Churches in the Waco, Texas area, earning the reputation of a “trouble shooter,” before serving in pastoral ministry in Tennessee. He later worked with Bishop Frank C. Cummings to establish the Bonner-Campbell School of Religion in Edwards, MS in 1981, serving as its dean.
In 1985 Rev. Duncan returned to pastoral ministry in Tennessee, where he also served on the staffs of Lane College in Jackson, and Carey Counseling Center in Paris. Additionally, he served for fifteen years as pastor of Quinn Chapel AME Church in Paris, where he led the congregation in community outreach and restoration of the historic church edifice.
Rev. Duncan served as pastor of Historic St. James, following Hurricane Katrina, from December 2015 to November 2015, where he led the congregation in ongoing comprehensive restoration and development projects. He also served on the staff of the Bush-Clinton Katrina Fund. Rev. Duncan has written and facilitated over $400,000 in grants and financial gifts for restoration projects, including a preservation grant initiative sponsored by the National Trust for Historic Preservation and the American Express Company that awarded Historic St. James $100,000. He later worked with a developer to negotiate a six million dollar tax credit grant for the development of the 31-unit Roman-Bienville Homes apartment complex directly opposite Historic St. James.
Rev. Duncan is a member of the Sigma Lambda Chapter of Alpha Phi Alpha Fraternity, Inc., Pride of Algiers Lodge #102, Prince Hall Masons, the National Association for the Advancement of Colored People, and Churches Supporting Churches. He is also an active member of the Dillard University National Alumni Association, having served several terms as National Chaplain. He also served Dillard as Interim University Chaplain. He is the father of three adult children, David A. Stevens, Dr. Jan E. Duncan, and Natille E. Duncan.